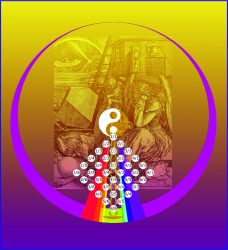 The Harmonics Symposium in 2010 was the first symposium of the Harmonics Center in Nuremberg. It took place on May 1+2. 2010 in the medical center Albrecht-Dürer. Our supporting program included the exhibition of paintings by Ms. Angelika Kandler Seegy. Klaus Fleischmann showed and explained his models of Platonic Bodies. Martin Seliger introduced us to his „Overtone Tube“.

Summary of the Main lectures:

To calculate the hydrogen line spectrum, the so-called Rydberg formula has proven itself. By means of suitable mathematical transformations one arrives at a harmonic series of the form: (1/2):( 2/3):( 3/4):( 4/5). From this it can be concluded that in all atoms with an electron in the outer shell similar harmonic orders can be found.

Hartmut Warm „Harmonical and Geometric Structures in our  Planetary System „ Hartmut Warm examined the earlier ideas of Pythagoras and Johannes Kepler on the harmonic order in the planetary system with modern astronomical methods and discovered where there are indeed harmonical and geometric structures that stand out on the one hand from purely accidental findings, on the other our aesthetic feeling in high degree of appeal.
A shortened pdf version of the presentation can be opened and downloaded HERE (in Gernan).

Klaus Ammann, „Harmonia Plantarum: an extended view“ The most important statements in Kayser’s Harmonia Plantarum are briefly summarized. It deals with the basic taxonomic concepts of plants (Hammes, 1981) and their history with the ancient Greeks, Goethe and Darwin. Emerging holistic concepts, autopoietic interpretations in evolution and the still enigmatic relationships between real plant forms and the often amazingly similar fractal patterns are discussed.

To create a festival of colors, the twelve-color color wheel is developed from the three luminous primary colors. In this simple event, the soul can come to rest and reverently experience one of the wonders of this world.

To begin with, we basically ask: „What is harmonics?“ With the mapping of equal-tone lines on the monochord, we discover an immediately obvious harmonic fractal. After dealing with elements of chaos theory, we encounter elementary harmonic rhythms between order and chaos in the progressive development of the Feigenbaum diagram.

A pdf version of the presentation can be opened and downloaded HERE (in German).

It seeks the meaning of harmony as the mediation of humanity. A phenomenological approach to the modern understanding of harmonic symbolism is designed, which adds to the experienceable visible the invigorating audible.
A text summary can be downloaded HERE (in German).