A contribution by Willibald Limbrunner

On this page we want to distance ourselves clearly from the abuse of the term “harmonics” in general, as well as concepts and images that have meaning and importance within the harmonics, but taken out of context, not only lead to misunderstandings, but occasionally to irresponsible interpretations too.

One such term is “The Flower of Life” 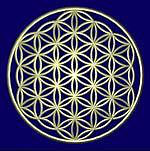 The background, which in itself is harmless, is an ornament that has been found time and again in churches, temples, secular buildings, tombs, art objects and manuscripts.

But the name “flower of life” is nowhere demonstrably proven.

The following article by Willibald Limbrunner “The Flower of Life and the Thrive Movement” deals with a particularly blatant example of a hair-raising irresponsible abuse – even wild conspiracy theories.