Harmonics has an old-venerable history. With the life work of Hans Kayser (1891-1964), harmonics has acquired a dimension that encompasses all fields of thought of art and science. 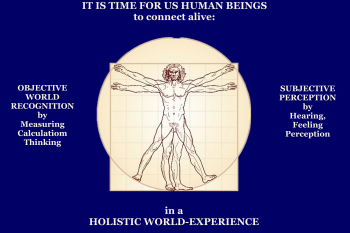 Thus, harmonics is facing an extraordinary challenge. Not only because of the infinitely wide field that it has to deal with. But also because the field of the scientifically objectively comprehensible on the one hand is still growing. But on the other hand, above all, it is now becoming clearer and clearer, that the way of grasping and presenting this “world knowledge” must take fundamentally new paths.

This change began in the early 20th century with the discovery of the quantization of energy exchange in the microcosm of the atomic and subatomic world. Meanwhile, the science of nature has gone on in big steps. In the first half of the 20th century, physics had dominated the field with the development of quantum theory and the experimental validation of the theory of relativity.

Willibald Limbrunner has repeatedly given reports on the harmonic interpretation of results of quantum physics at the recent Harmonic Symposia. e.g. 2011 in his presentation:
“Geometry is Frozen Music, Part I Sound of the Atomic Shell, Sound of Crystals”
or:
“The Pythagorean tetraktys and other symmetries – in quantum physics rediscovered universal harmonic creation structures”

Today, two other fields of research are increasingly determining our understanding of nature: namely: the evolution theory and the so-called chaos theory, which should better be called the “theory of dynamic systems”.
In more detail, Hans G. Weidinger reports on his website “Science today”. For further development of the Evovlutionstheorie reported Hans G. Weidinger under:
“Man in Creation”.
Hans G. Weidinger has already reported on important connections between harmony and chaos theory at the 1st Harmonic Symposium 2010:
“Harmony between order and chaos – harmonic aspects of chaos theory” 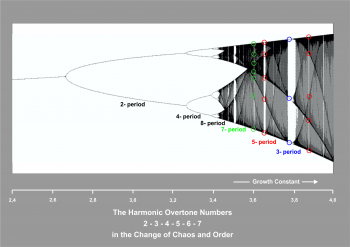 Both areas of research are increasingly fertilizing each other. This creates a fascinating new idea of ​​the processes in nature and of our integrated being in the entire cosmos. This opens up unimagined opportunities to re-understand our ever more helpless relationship with nature and transform it into a new, living reality.

At least now harmonics is required to make their perhaps all-important contribution.

To do so, however, harmonics must find a self-understanding appropriate to the present state of our understanding of nature. And not only that. It must also find suitable ways to make this new understanding of the world tangible in the sense of the harmonic acroasis.

An approach in this direction is attempted in the following presentation: “The essence of harmoncs” This lecture currently is available only as PowerPoint presentations or as pdf document. In this paper the present recognition of the natural sciences makes use of the fact that throughout nature there is a principle of exchange between information from the outside world and reactions of an inner world that exists down to the smallest and simplest forms of life.

Harmonics is then the bridge between these worlds of “outside” and “inside”. A realization of this bridge to a holistic world-life is thus synonymous with the conscious perception of the living exchange between these two worlds. 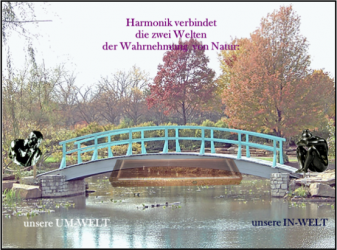 Such an approach should make it possible for the emerging new understanding of nature to become a new, fruitful relationship with nature through well-understood and practiced “AKROASIS” and thus a new living world experience.

In practice, this means three things:
We need to know and understand the new insights about the nature and workings of nature. “Of course” in a way that suits us.
These laws must be interpreted and presented harmonically *).
But then the harmonic interpretation and representation must still arrive in our interior and be answered from there **).
It is only in such a three-step process that an exchange arises that lets us experience the world and life as the living reality in which we find the meaning of our life.

*) That’s why Harmonik-AG Nuremberg has been trying for over 10 years now. Examples of the work done here were in the meantime (as of June 2017) 8 times in Nuremberg held harmonics symposia:
**) also since the 1st symposium contributions, such as on May 2, 2010: Angelika Kandler Seegy “Color Devotion”, or at the 2nd Harmonic Symposion on April 30, 2014: Peter Michael Braun, “Harmonics and Music – from the perspective of a composer”

DEAR FRIENDS OF HARMONICS!
PLEASE TAKE THIS IDEA AND HELP TO MAKE IT A
NEW HARMONICAL REALITY!