H.G. Weidinger spoke about “Addition of sinus-vibrations – a far-reaching phenomenon”.

Willi Limbrunner presented “vibrational phenomena as the exact harmonical basis of the atoms and thus of the visible world”. He also explained “The Meaning of the number 72.

The main topic was the “sacred sound of nature” a harmonical re-enactment of the “path to the monstrous cult song”.

Hans G. Weidinger reports on the investigations of the abbot Archimandrit Johannes in the orthodox “Holy Trinity Monastery Buchhagen”. The result of these studies and investigations are laid down in a book “The path to the natural-sound cult song”. It includes two CDs of songs from this monastery, which impressively demonstrate the practice of this nature-tempered cult song.

The presentation first gives an overview of the contents of the book. Subsequently, the topics will be discussed in more detail:

Finally, some examples of the monstrous cult song from the aforementioned two CDs were heard, in the Doric, Ionian and Phrygian modes.

A pdf-version of this presentation can be downloaded HERE (in German). A re-enactment of the “path to the natural-sound cult song” of Archimandrit Johannes In the Orthodox “Holy Trinity Monastery Buchhagen”

First, it was about the next Harmonic Symposium 2014, which takes place again in Nuremberg. H.G. Weidinger had distributed ideas to the participants before the meeting and asked for comments and additional ideas. An input comment was presented:

“Not the thought, but only the experience has real value. ….. My concern for a new contemporary and spiritual view of HARMONICS is the harmonics, which is visible, audible, tangible, malleable and tastable. ….. It’s about RESONANCE, harmony and synchronization with the harmonies of creation ….. “

This was followed by all participants, and an intense discussion arose over the realization of this approach, in which the first approaches to implementation at the upcoming symposium were visible.

After the coffee break, an excerpt from the CD “Tonalities and Star-Signs” (Tonarten und Sternzeichen) by Stefan Mickisch was played. In it, the author quotes inter alia the well-known music theorist Andreas Werkmeister from the Baroque period. In the quote, he emphasizes that the temperate mood that he advances is a “God-given work” in order to bring the divine harmonies in his music to full development. In doing so, he contradicts conceptions, that it is precisely the natura-sound that expresses the harmony of the creation created by God in the purest and most beautiful.

This interpretation is e.g. based on the ” natura-sound cult singing” as practiced by the German Orthodox monastery in Buchhagen. See the detailed study of this type of cultgiving at the previous meeting on June 29, 2013.

H.G. Weidinger pointed out that these two different interpretations of creation are typical of the fundamental difference between the notion of the cosmos as a closed system and the contemporary scientific world view of an open system in which an everlasting creation operates.

First, Uta Hügerich gave a presentation entitled “the intervals – viewed from the perspective of a musical semi-amateur”. This time only the intervals octave, fifth and third were treated. But this happened in a particularly impressive way. This was followed by a detailed discussion, which showed how important this type of presentation is for all participants, so that everyone can follow the same level of understanding. It was decided that this theme will be completed first by the interpretation of the sixth and the seventh. It is already clear that the topic “Intervals” will be further discussed in future. 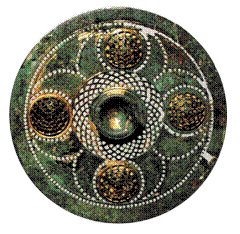 After the coffee break, Hans G. Weidinger presented information that shows that the Pythagorean-harmonic way of thinking already existed with the Celts in the 6th century BC. It was known and was used to extremely well-crafted work. A particularly impressive example is the “bronze slice of Cuperly”. Wilibald Limbrunne showed how the structure of the ornaments on this disc can be understood harmonically.

Once again, the place and timing of the Harmonic Symposium 2014 in Nuremberg were discussed. Hans G. Weidinger will clarify with Angelika Kandler Seegy, if as location the community center of St. Jobst comes into question. Thereafter, the appointment will be finalized.